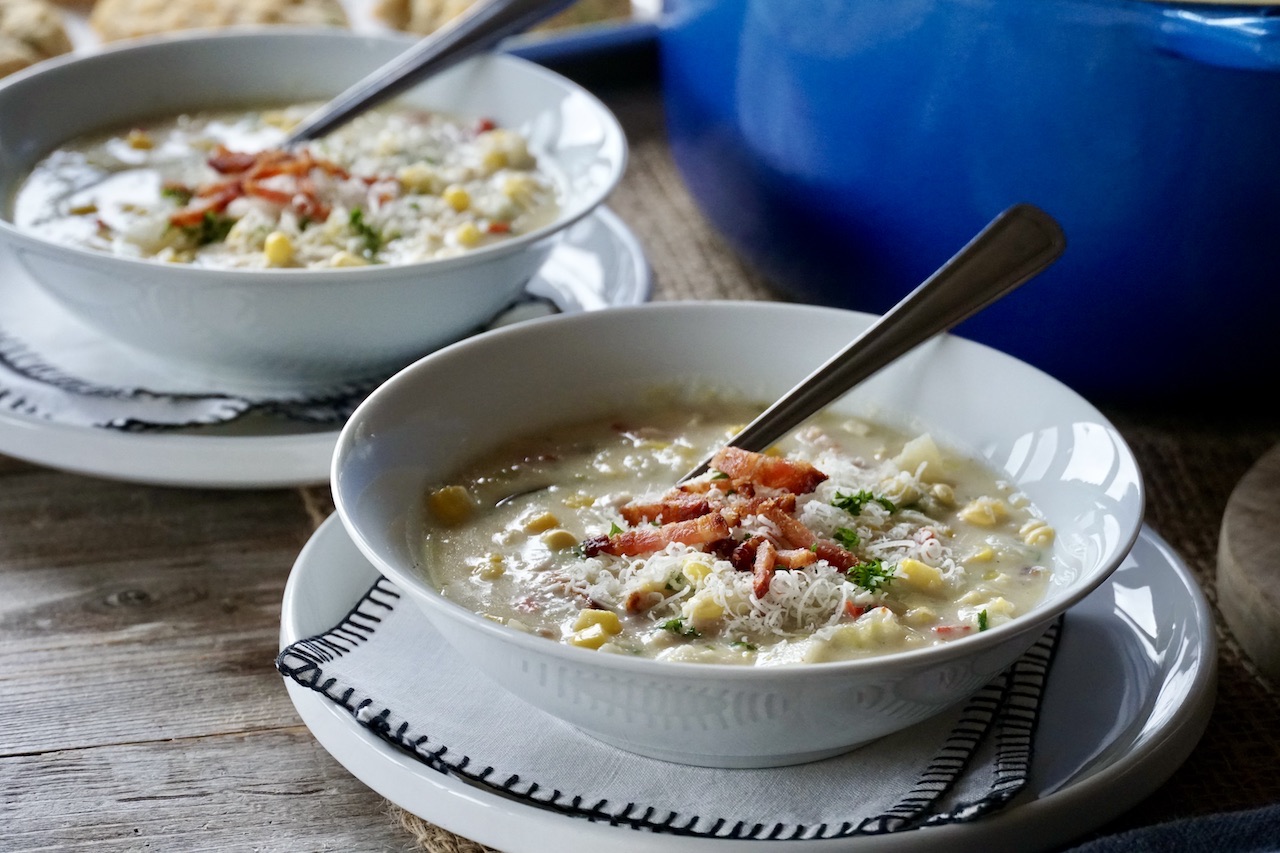 A rich, creamy soup of freshly shucked corn, potatoes and a mix of flavourful veggies, finished with cream and Parmesan…

It’s time for a flavour-forward take on the classic CREAMY CORN CHOWDER RECIPE!

We decided to include a dedicated SOUPS AND STEWS collection tab on our website for good reason; a steaming bowl of well-made soup may very well be the perfect comfort food. This CREAMY CORN CHOWDER RECIPE is destined to become a fan favourite. Here’s a quick overview of what makes this recipe so appealing:

After making and enjoying this chowder recipe, don’t forget to revisit Weekend at the Cottage to check out some of our other satiating soups. We know you’ll like our super-popular HOMEMADE TOMATO SOUP, our SEAFOOD CHOWDER, this SAUSAGE SOUP WITH WHITE BEANS or our healthy CARROT-ORANGE SOUP. When it comes to soups and stews, we’ve got you covered.

For now, grab a large pot and head to the kitchen, because it’s time to make a delicious CREAMY CORN CHOWDER RECIPE.

This chowder recipe is made using a gathering of fresh vegetables, chicken stock, cream and Parmesan cheese. We purposely kept the list of ingredients short, sticking just to the things that maximize flavour yet create a richness that doesn’t need a flour-based roux for thickening. Yup, this recipe is gluten-free. As with all our recipes, we suggest making this one using organic vegetables purchased from a local source. You will taste the difference.

Although there are times when we suggest going the simple route and using frozen corn for a recipe, this isn’t one of them. For this homemade chowder recipe, only fresh sweet summer corn will do. Sweet summer corn comes in white, yellow, coloured and multi-coloured varieties. Corn tastes best when freshly picked, so head to your local farmer’s stand or market and look for a popular variety like Silver Queen, Jubilee, Butter and Sugar, or Peaches and Cream. These varieties will lend a pleasing tender sweetness and almost nutty corn flavouring to your soup.

Don’t forget to watch the VIDEO crafted for this chowder recipe. We’ve got a nifty way of removing corn kernels off the cob that happens effortlessly. Best of all, no big mess when you do it!

This chowder recipe starts like almost every other soup; a sauté of aromatic vegetables cooked up in a fat, in this case, butter. Using a combination of leeks and yellow onion gives the dish a fragrant sweetness, while the celery adds flavour and texture. Lastly, adding diced potatoes into the mix is a characteristic element in chowders. We suggest using round white or Yukon gold potatoes. These varieties won’t fall apart, so you’ll end up with chunks of cooked potato that add a nice bite to the soup when mixed up with the corn.

Wait! Did you just read that right? There are corn cobs in this recipe? You bet! As mentioned above, here’s where the special flavour boost comes in. Once the chicken stock gets added to the pot, all of the veggies get a nice slow simmer for 20 minutes, which got me thinking, “Hey, I bet those corn cobs are packed with corny essence!” Adding the kernel-less corn cobs into the pot at this point gives the chowder some serious flavour.

Once the soup has simmered for 20 minutes, remove and discard the cobs and add in the corn kernels. Stir them in and continue to simmer for 5 minutes more. The corn kernels will cook within that short period of time and release their flavouring into this CREAMY CORN CHOWDER RECIPE.

We included a red pepper in this recipe not only to add a bit more sweetness but to also add a pop of colour. It definitely adds to the visual appeal.

This soup recipe gets its hallmark texture from three simple steps that combine to create something memorably creamy. First, we reserve five cups of the soup “as is”. Then, we carefully purée everything left in the pot using an immersion blender, food processor or standing blender. Stirring the two back together creates a naturally thickened chowder made without using flour, hurray! The next step is to add both 10% cream (half and half) and grated Parmesan cheese. They also help thicken the soup to a pleasing consistency.

Right before serving this soup, we recommend stirring in some chopped parsley (or chives), plus some finely diced red pepper. These two final ingredients give the chowder a great presentation, adding a pop of contrasting colour to the yellow of the corn.

You’ll also notice we’re giving you an option to add an unexpected garnish as well; chopped bacon. If you happen to have some thick-cut smoked bacon on hand, cook off a few rashers until just crispy. Towel off any fat and chop them up, adding a sprinkle of crispy bacon bits to each bowl when you serve. It’s a wonderful addition.

So are these FLAKY TEA BISCUITS or our light and fluffy CHEDDAR BUTTERMILK BISCUITS.

Click the Icon to pin this recipe to your board. 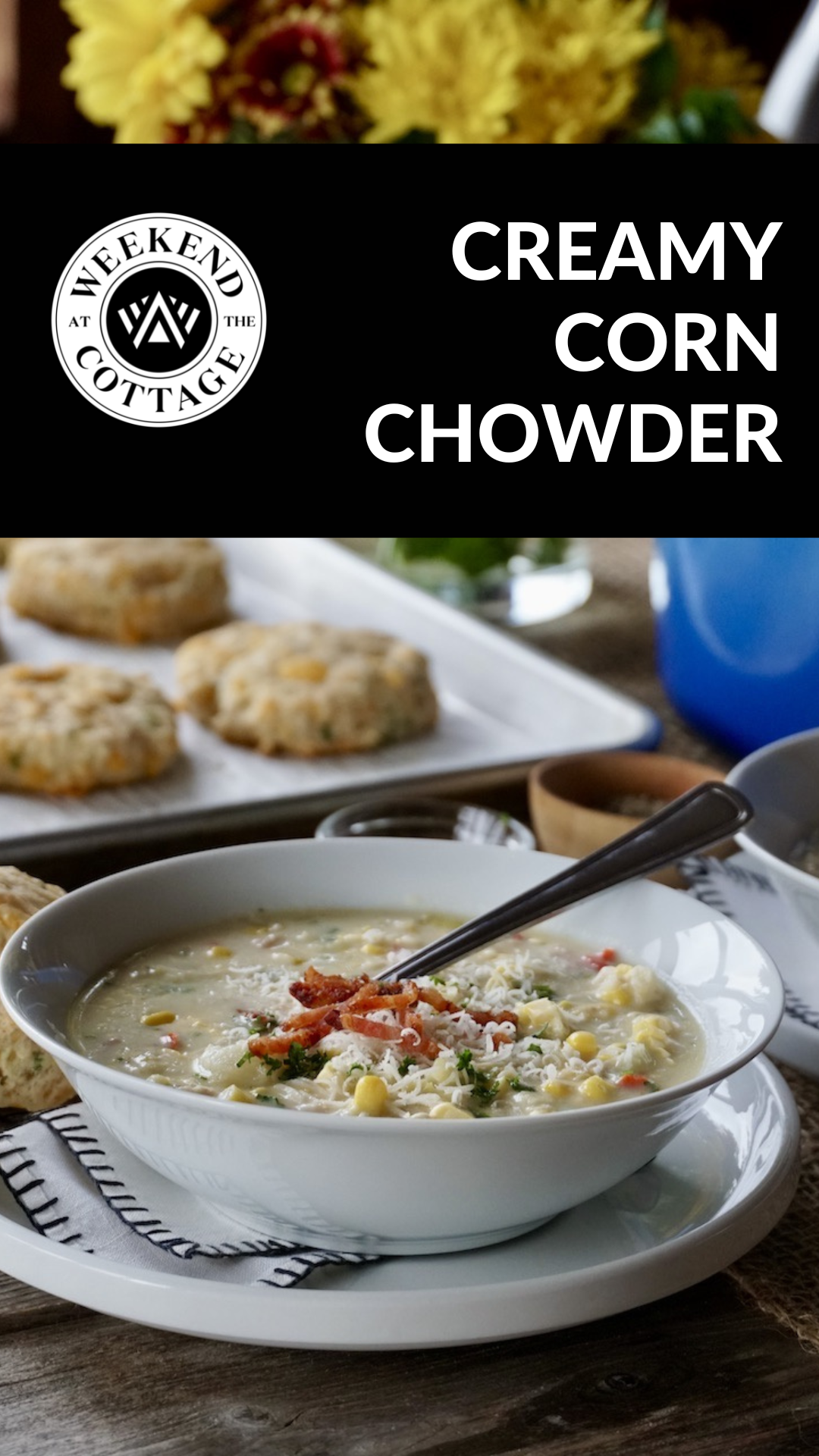 Products used in this recipe

Just click on the below links to purchase items through Amazon.com and add them to your collection. Happy shopping!

NOW OPEN! Visit our store for your HOLIDAY GIFT IDEAS.